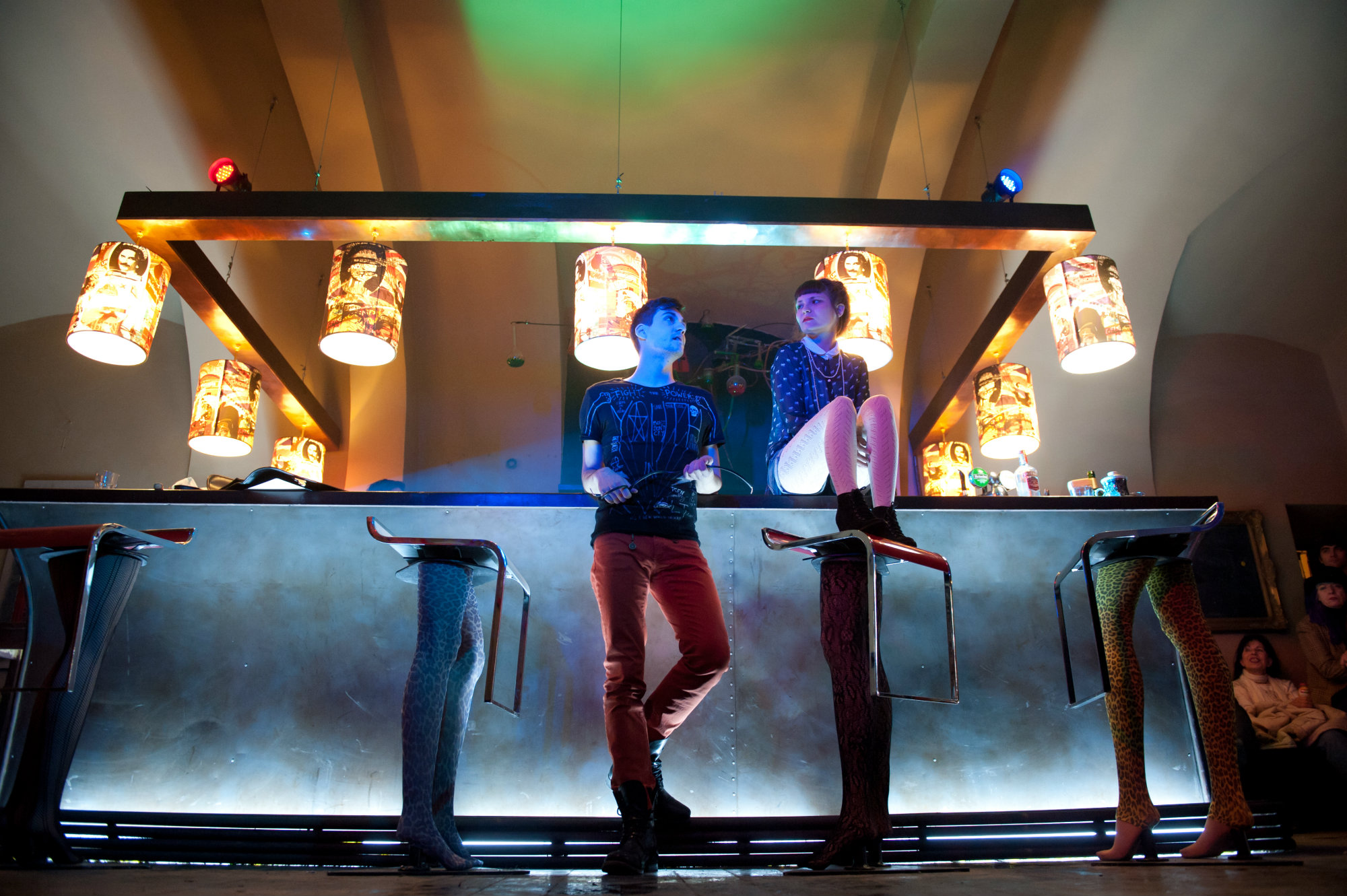 With the support of:
Timişoara City Council

In 1920s America, there was the belief that the first world war will be the one to put an end to all wars. Great naivety, as we well know today, since the war goes on with even greater impetus, both on a political and a personal level. For example, in the living room of the Man and Woman of "The Great War", who argue over the formalities of divorce.  Apart from the division of assets, the main question is: who gets to keep the children? The surprise is that neither parent wants them, which forces them both to resort to even more unorthodox strategies.
Just as unorthodox is Jimmy's behaviour in "The Furies" – after a bicker with his girlfriend, Paula, he brings his sister, Jamie, to the reconciliation session. Her whispers, doubts and reprimands sabotage any chance left for reconciliation, even if Paula has been waving the white flag for quite some time. How much of this love is brotherly love and how much of it is sick love? Also sickening, but in a more amusing and lighter tone, is the relationship between the two young people from the first part of the play, who tell on a detached tone the short love story between a serial killer and a young woman eager to experience new things.

In other roles
Horia Săvescu (a. G.)
Silvia Török

"The staging combines two dramatic sequences – The Furies and The Great War – proceeded by an intro – a lovely flirt – meant to welcome the "clients"/spectators into the atmosphere of the café, and by a dancing interlude, in which they are invited to take part as the show is meant to be laid-back and interactive. However, SEXes/AXes cannot be considered a typical "pub" performance as the entire space is scenographically reconfigured. […] This is a smart move in terms of direction and scenography – setting and costumes, from bar stools with feminine legs wearing silk stockings or a bourgeois interior corner, with a fleecy carpet and cabinet with fine drinks, to a heroine's "emo-metalist" outfit, have been designed by Velica Panduru – by which the spectator is "lured" into a community environment, on the one hand – the first scene actually takes place at a coffee table – and an intimate one, on the other hand, in which the eye of the spectator peers sneakily – the second part is performed in a family living room. Both dramatic sequences are clashing dialogues, which defy logic, and in which the tension is revealed gradually and irritatingly, and the effect of the protagonists' conflictual interaction also reverberates onto the spectator. Both in terms of direction as well as acting, this atmosphere has been captured/rendered with great acuity, in this element also residing one of the main strong points of the show. […] Daniela Török, Alex Halka and Olga Török have managed to excellently portray their characters, the first one traumatically, as the sick lover, the second one immaturely, as the lover incapable to make a decision, and finally the third one, headstrong, inflexible, as the sister – a substance role, though not a big part for the talented actress. […] What is the reality, what is the stake of life, how much of their relationship is theatre and how much of it is real – this seems to be the sub-textual question of the sequence. Enikő Blénessy and Georg Peetz have accurately portrayed the two characters that confront on stage. The atmosphere of the show is emphasized by the tense music composed by Vlaicu Golcea, by the appropriate light-design created by Lucian Moga and by Florin Fieroiu's rhythmed choreography. Somewhat unusual in its degree of interaction – the spectators react too little to the stage stimulus, despite the "invitation" to dance, react, fit in, as if they were accidental "witnesses" of some crisis – SEXes/AXes is a challenge-show that teases the mechanisms of theatre reception, transferring them to the social proximity area. In less sophisticated words, it's like sitting at a table in a coffee shop and watching the "spectacle of life" at the neighbouring tables. You have to admit that, regardless of how "educated" you are, you would still eavesdrop a little."

"Everything happens naturally, with no uptightness, no inadequacies, but  with several adaptations and design adjustments absolutely necessary for the two plays – The Furies and The Great War – operations that guarantee a good text for the show (dramaturgy: Valerie Seufert). Considering the specific nature of the future staging, I assume that during its elaboration a number of niches, traps, developments suggested by the playwright have been eliminated, focusing instead on the spectators' involvement. […] However, at 7.30 sharp, as seen, with German precision, Vlaicu Golcea stopped the music, Rareş Hontzu stopped waiting on tables, picked up the microphone and warned us that it was time the show began therefore we had better turn our cell phones off. Then they became one with their characters; they played themselves and Silvia Török and Horia Săvescu also played their characters. […] The actors performed flawlessly the sinuosity, the malice and vanity of the characters. […] Radu Alexandru Nica seems satisfied. I believe this is not without reason. He directed a true theatrical performance, inside a bar." 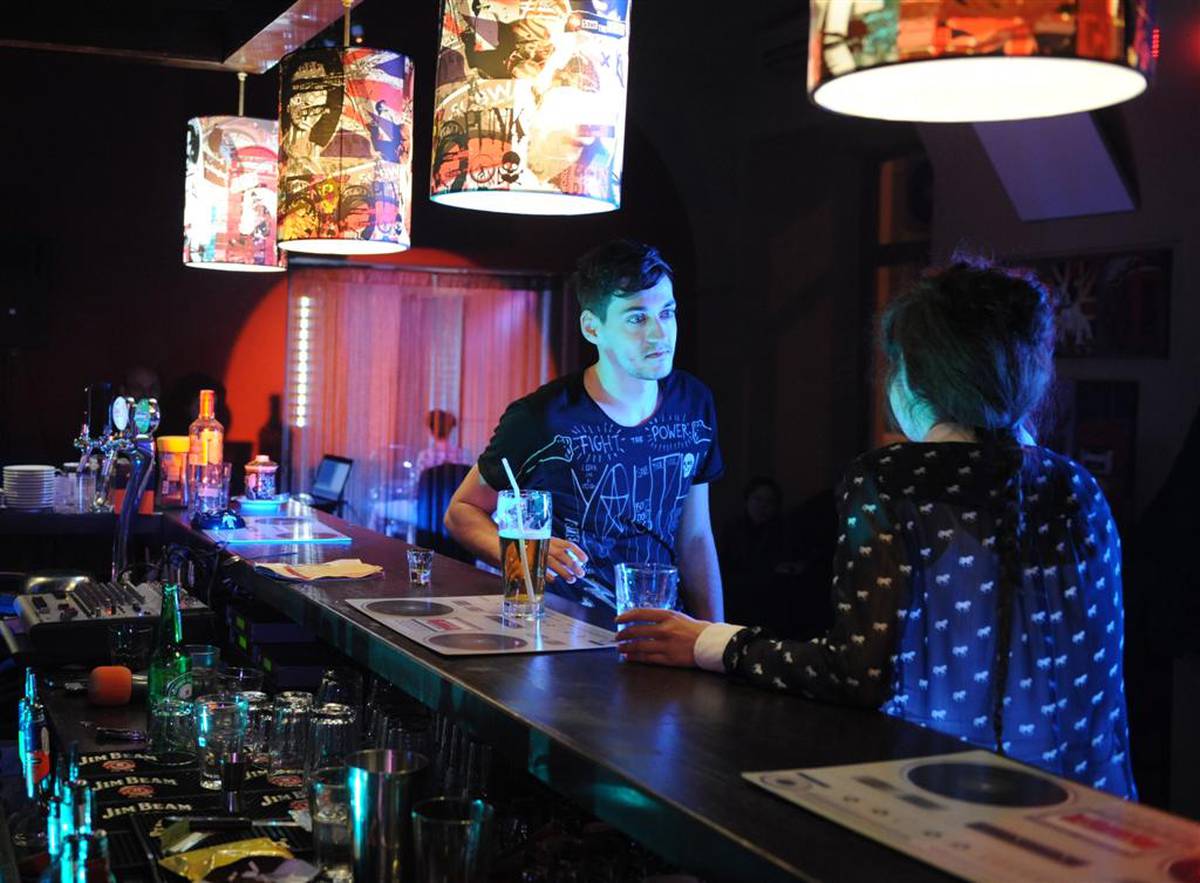 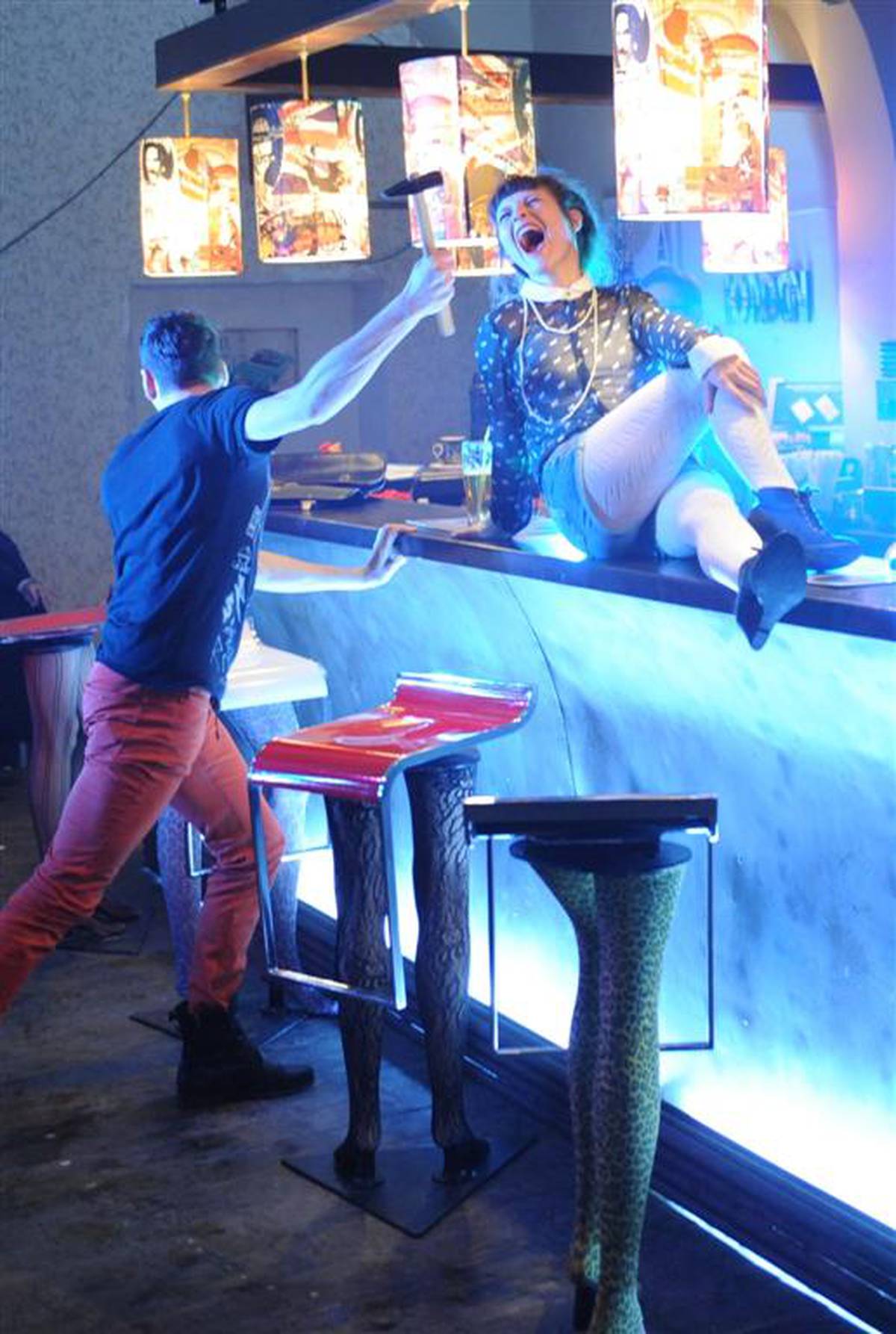 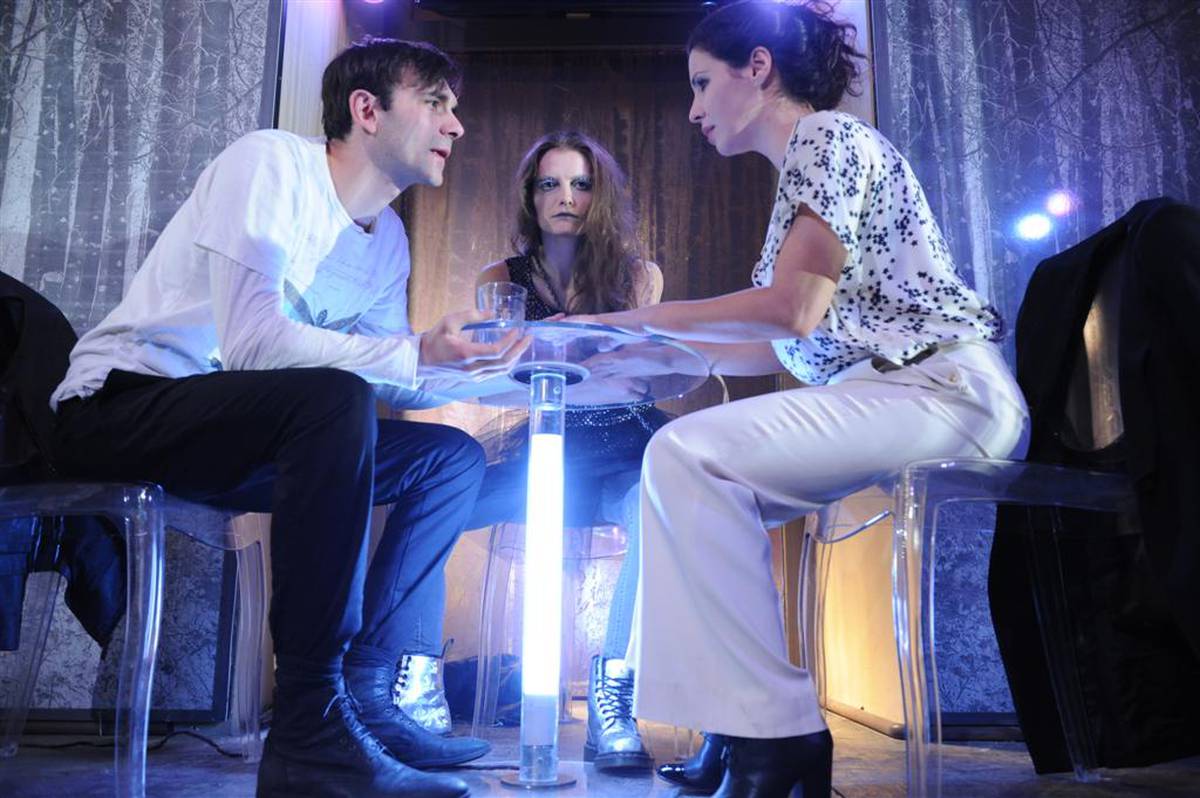 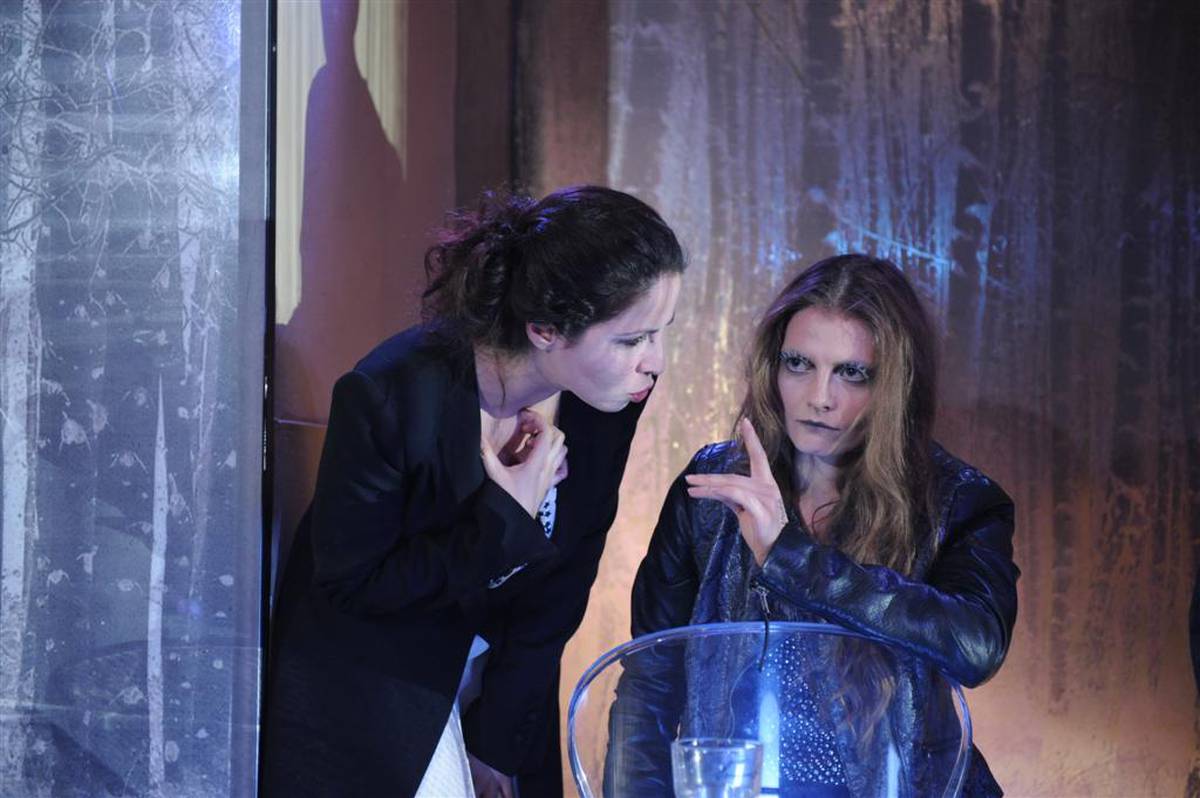 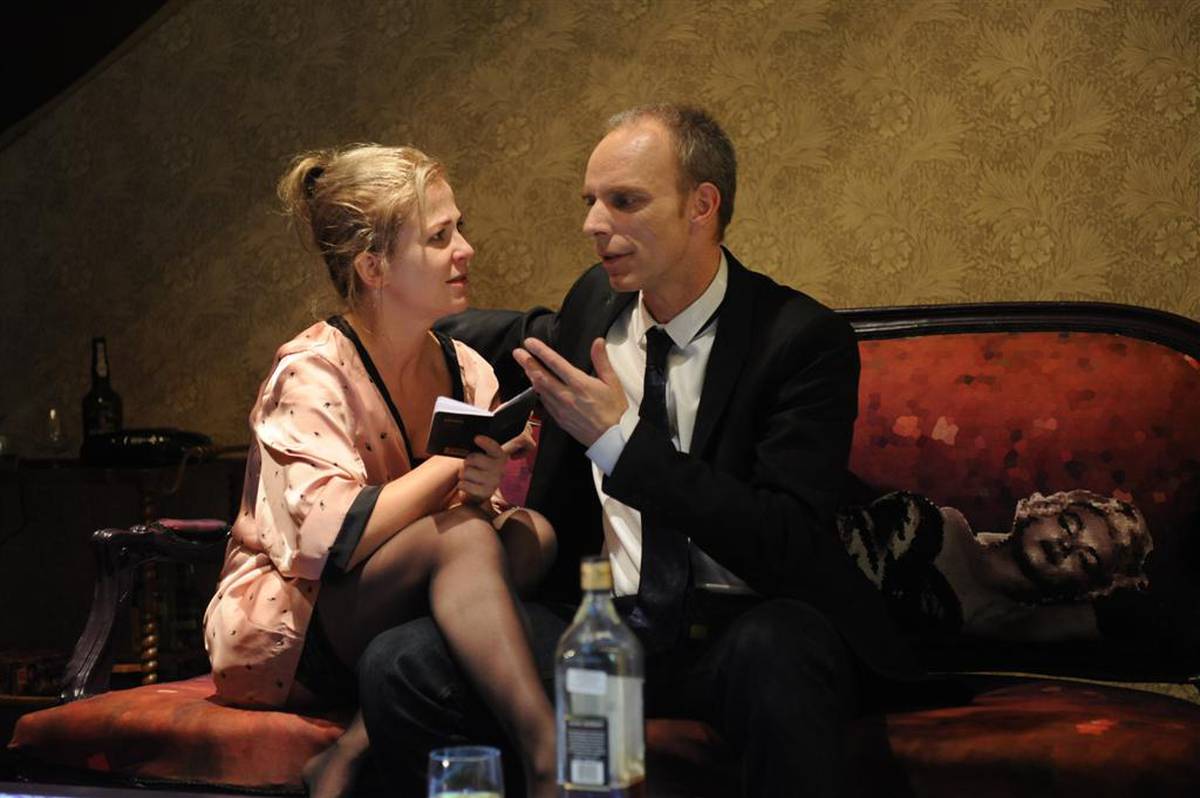 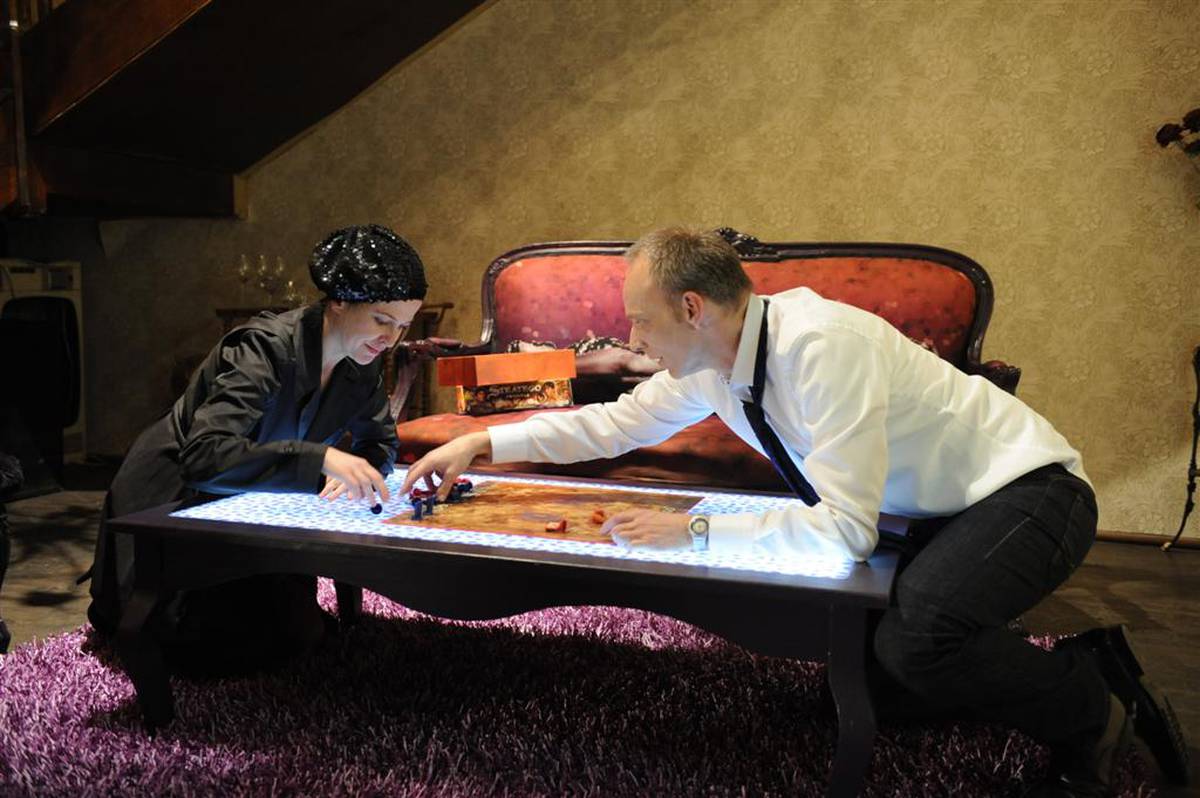